I am having a very difficult time being serene today. I read the article written in the Fresno Bee about the Kiss In at Chick-fil-a that is scheduled for Friday. But, it is not really the article that has gotten me so out of sorts; it is the comments section.

First off: I love free speech. I love that we are free to say (almost) anything that we want, and the government will not throw us in jail. I love that my opinion is free to be whatever I want it to be. I love that others are free to give their opinions, also without fear of arrest.

This is NOT about people not being able to express themselves freely. This is about the fact that, when given this amazing right, they use it to bash and threaten others. They use it to lie and spread hatred and to imply violence (sometimes, outright say it). They use this blood-soaked right in order to fight against the rights of others.

So, it is not the fact that they USE it; it is the fact that they have made a mockery of it. And, then they hide behind it using (wait for it...) freedom of religion. Yes, they claim that they are a "God-fearing" person that just can't STAND what the homosexuals have tried to do to this country. How the gays just 'can't leave it alone" and that Chick-fil-a is filled with good people that the gays just want to harm.

Okay, I can totally get behind the idea that the people behind the counter may be good and decent people. My guess is, they are also at the bottom of the financial food chain, too, so they have nothing but my sympathy on that front. But, does that mean that the rest of us need to lay down and accept the inequality that the anti-gay agenda is trying to cement into society? Does the fact that good people may be a little uncomfortable as their managers scramble around trying to deal with the fact that the gays are in their store and (gasp) kissing, mean that we throw in the towel?

Good people were uncomfortable with integration, too, at first. When you are taught something, like bigotry, from a very early age, you accept it as your norm. And, people get upset when their norm gets questioned, or god forbid, proven wrong. Then they become like the angry cornered animal: they bite.

And, THAT is what is upsetting me so much. At an intellectual level, I understand why they are doing it (fear) and how they got there (ignorance). But, like the cornered animal, they are still to be taken seriously. Like this post:

There were many like this, but then we moved into true brother-married-sister territory: 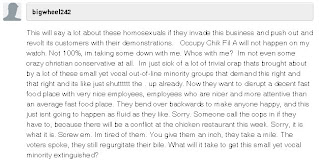 Oh, and my favorite (which was actually a response to the above comment:

These are but a couple samples of the words of those wonderful "God-fearing" people. (Never understood that term...if God is love, why do they fear him so much?) Yes, it was comment after comment of how the gays want to take away their right to free speech and a huge amount said that gays should just shut the fuck up.

Yes, they told the gays to shut the fuck up after accusing them of trying to abridge their own right to free speech. I shit you not.

Here's the thing, it is not that I want them to shut up. I just want them to start using the brain in their head and THINK for a moment.

2. They are hiding behind a man who never said a single anti-gay word. They are using a religion that was based on being kind to others as their reason for being dicks to others. (Seriously, how do their heads not explode under this kind of dissonance?)

3. And the crux of the issue: IT DOES NOT AFFECT THEIR FUCKING LIVES IF GAY PEOPLE HAVE THE SAME CIVIL RIGHTS AS THEY DO. You have no idea how much it pains me to have to explain such a simple concept to a gradeschooler, let along an adult who should have been able to see this with their fucking eyes closed. See, taking gays people's rights away? That DOES affect them and they have EVERY GODDAMN RIGHT to be pissed and to fight back. But, gay people actually having those rights? Face it, if Fucks It Up News and that idiot on the Corner(stone) didn't TELL you to be pissed, you might actually have time in your head for the things that really SHOULD piss you off (like speculators fucking with the price of oil or that elections can be freely bought now, or the fact that our produce is now something not found in nature, or that food companies have fought (and won) the right NOT to tell you if anything in their product is a GMO).

Because, god forbid you actually get upset over something that actually WOULD affect your life.

Because, unless YOU are the one being kissed, I can tell you with great assurance, it does NOT affect you.