Based on the Pulitzer Prize-winning play by American playwright Thornton Wilder, the opera is an intimate and touching look into everyday life in a small town.

Tickets start at only $25

This company of 10 male dancers from London, founded by former Royal Ballet principal dancers, Michael Nunn and William Trevitt, has been hailed as "viscerally thrilling" - The Telegraph and "a paradox of muscular impact and weightless flight" - The program Life features 2 new commissions by internationally-acclaimed choreographers Pontus Lidberg and Javier deFrutos which are inventitve, vivid and memorable.

Tickets start at only $25

Tickets start at only $33 The producers of the world’s biggest magic show, The Illusionists have teamed up with the award winning puppeteers from War Horse to present a thrilling turn of the century circus spectacular.

Sensational puppetry puts Elephants back in the ring as never seen before along with a huge cast of the most unique, amazing and dangerous circus acts from all four corners of the world, from strong men to contortionists, acrobats to musicians, knife throwers, high wire and much more!

Saturday Night Live has gotten in on the fun and has provided their own parody of the Pure Flix franchise with this trailer, which could just as easily be entitled God’s Not Gay:

Awkward and awful questions that gay couples always seem to get asked are perfectly nailed in one video from Buzzfeed.

AND THEN CAME TANGO

The play tells the true story of Roy and Silo, two male chinstrap penguins at New York’s Central Park Zoo. The couple is given a discarded egg, hatch it, and raise the baby chick, Tango, as their own. Suitable for 1st graders and up. Two performance only. Limited seating. Free parking.

Today only!  Watch Transparent on Amazon for FREE, no membership required. 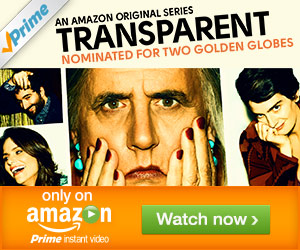 Also today only, save nearly 30% on an Amazon Prime membership!  Use the link below to help support Gay Fresno:

Join for only $72, regularly $99.  If you have an existing Amazon prime membership, you can send yourself a gift membership code at this space price and enter it when your current membership expires. Win - Win!

The Religion News Service has reported the formation of a new organization called — And I am not making this up — Evangelicals for Marriage Equality. It was launched on Tuesday and immediately began collecting signatures from evangelicals who support same-sex marriage. Its advisory board includes several evangelical luminaries: author and speaker Brian McLaren, former National Association of Evangelicals vice president Richard Cizik and former USAID faith adviser Chris LaTondresse.

Some of you may recall news articles awhile back, when Cizik resigned from his position with the National Association of Evangelicals, citing his support for same-sex civil unions.

It is immensely heartening to see significant evangelicals come to a realization that if the institution of marriage is good for society, and good for opposite-sex couples, it should be equally good for same-sex couples. This new organization is yet another expression of the growing recognition that fidelity and stability require social acceptance — that when you demonize people, when you deny them respect and equal civil rights, you are encouraging destructive behaviors.

So — you may be late to the party, Evangelicals for Marriage Equality, but we certainly welcome you.

That said, there may also be an element of self-preservation in this sudden turnaround. Over the past few years, membership in these conservative churches has been declining. Young Christians, especially, have rejected a theology that seemed to place homophobia at the very center of its belief structure.

Polling has confirmed that the demographic split that characterizes the broader American society is equally pronounced among adherents of conservative and evangelical Christianity. Not that young evangelicals are leading the charge to embrace equal rights for their lesbian, gay, bi & trans peel's, but they are demonstrably less homophobic than their elders and changing (for the better) with dizzying rapidity.

Happy Holidays from all of us at Gay Fresno

Popular video blog, Mental Floss, has 31 things you might not know about holiday songs, which did you know? Hey all… just got this in… if you fit the bill or know someone who does, please let them know:

Are you an engaged or soon to be engaged couple whose family disapproves of your relationship? Have family members made it clear that they will not attend your upcoming wedding? Have you found the love of your life, and desperately want the support of your whole family?

Introducing a new docu-series that follows star-crossed lovers who have family that disapproves of their relationship because of race, religion, sexual orientation, class, or culture? The series will work to break down barriers separating couples and their disapproving families.

If you fear the moment when the officiant asks those who do not approve to rise, we want to hear from you! Are you ready to put your love to the test?

To be considered for the show, please submit a brief bio, contact info, and recent photos of yourself and your significant other to:

This email address is being protected from spambots. You need JavaScript enabled to view it.

Kinetic Content
Casting Department
310-752-0846 – Main line
This email address is being protected from spambots. You need JavaScript enabled to view it.
http://www.kineticcontent.com

CABARET, the winner of 12 Tony Awards, is currently running on Broadway and is considered one of the most acclaimed and beloved musicals of all time. CABARET is a sensational, edgy, sexy, scary, mesmerizing and extremely entertaining look at a dark time in history. CABARET receives a PG-13 rating. CABARET contains mature themes, brief violence, drug use, partial nudity, sensuality, adult language, but the content does not reach the restricted R rating category.

“Everybody talks about the weather, but nobody does anything about it..." A quote always attributed to Mark Twain, though according to www.quoteinvestigator.com it might have actually been written by a little-known editor at The Hartford Courant named Charles Dudley Warner. But regardless, its a well-known saying and gives me an opening to ask: where and how do you get your weather info? And do you trust the places you go? Really?

With a computer, tablet or smartphone, these days there are not a few, not a hundred, but literally thousands of places to turn for the local temperature, forecast and data.

So where to go and why?

Well, for this weather-holic writer the first place I always turn is the national or government weather office in whatever country or territory where I am seeking the weather. I know this can be a bit tougher than just using my iPhones built in weather app (which I "stored” in some folder, can’t find and don’t miss) or WeatherBug or any of the others people wave at me if I dare ask the temperature, but why go elsewhere when in most (not all, but a lot) of cases, the forecast and temperatures are actually from the government employee working for the National Weather Service, Environment Canada, Britain’s Met Office or any of the myriad of other national forecasters? In other words, who wants or needs 2nd or 3rd hand info that may or may not be as reliable as what comes from the person who really knows his or her local climate?

So now that we have told you this little gem, how to find the forecast for Zurich, Switzerland, Hamilton, Bermuda, or Ogunquit, Maine?

Someone not too long ago asked if we were a computer column and I told them not totally, but I asked them why they were inquiring. I was told that computers are fun and interesting, but what about other things electronic.

It got me to thinking, and I sat there trying to think what these days does not have a computer (or several smaller ones or chips) hidden somewhere in the innards. I really, aside from a jar of ketchup and a pound of meat was pretty hard-pressed to come up with anything. In fact, the ketchup and meat might have RFID chips on or in the packaging to let inventory control systems and cash registers which use such items work.

But lets look at things which are a bit more obvious. Or maybe not. This all came to mind recently when our washer broke down. It’s a 2009 model made by a major manufacturer and it's packed with chips and computer controls which make it almost impossible to fix or work on (per the repairman the local shop sent).

The days when one selected regular wash and timed the cycle with a big dial are long gone, aside from a very few base bottom-of-the-line models. These days instead the machine wants to think for you (and I) and often this results in disastrous consequences.

No longer do we throw in the jeans, select a water temperature, turn a dial and hit start, but instead there’s a "jeans” cycle. There's one for woolens, delicates, perma-press, whites and things one wishes to sanitize — and all of that information about spin speeds, water temperatures and whatever else the machine needs to know (or thinks it does) are hidden in computer chips somewhere in the bowels of the washer. The issue is what if you do not want to use what someone in some factory has been told to program? Or what if something goes wrong whilst the cycle is underway — like a power glitch or water issues or worse?

TO WIN A WAR, YOU HAVE TO START ONE.

A Special Performance of

The story of a city in denial, THE NORMAL HEART unfolds like a real-life political thriller—as a tight-knit group of friends refuses to let doctors, politicians and the press bury the truth of an unspoken epidemic behind a wall of silence. A quarter-century after it was written, this outrageous, unflinching, and totally unforgettable look at the sexual politics of New York during the AIDS crisis remains one of the theatre’s most powerful evenings ever. Winner of the 2011 Tony Award® for Best Revival of a Play.

Please note: This is the stage play, not a screening of the HBO film.
THE FRESNO BEE review: http://fresnobeehive.com/archives/36668#more-36668